LONDON – Missy Franklin, Rebecca Soni, Dana Vollmer and Allison Schmitt won gold and set a world record in the women’s 4x100m medley relay Saturday at the 2012 Olympic Games, turning in a time of 3:52.05. It was one of two golds for the U.S. on the final night of the pool competition. 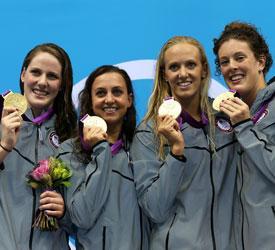 mers leave the Aquatics Centre after eight days of competition with 30 medals – 16 gold, eight silver and six bronze. It was the best showing of any nation in the swimming competition.

In terms of gold medals, this was the most successful for Team USA since it won 21 gold medals in the Soviet-boycotted Los Angeles Games in 1984. The men finished with 16 medals (8 gold, 5 silver, 3 bronze), while the women finished with 14 medals (8 gold, 3 silver, 3 bronze). The women’s showing was a marked improvement over the 2008 Games in Beijing, where they also won 14 medals overall, but just two gold.

Including the 400m medley relay tonight, eight world, 25 Olympic and 11 American records have been set at the Aquatics Center in London. American swimmers set five of the world records, and nine of the Olympic marks.

Please support our efforts to provide low-cost and free swimming lessons and equipment to children in our community!

Get To Know Tsunami Swimming